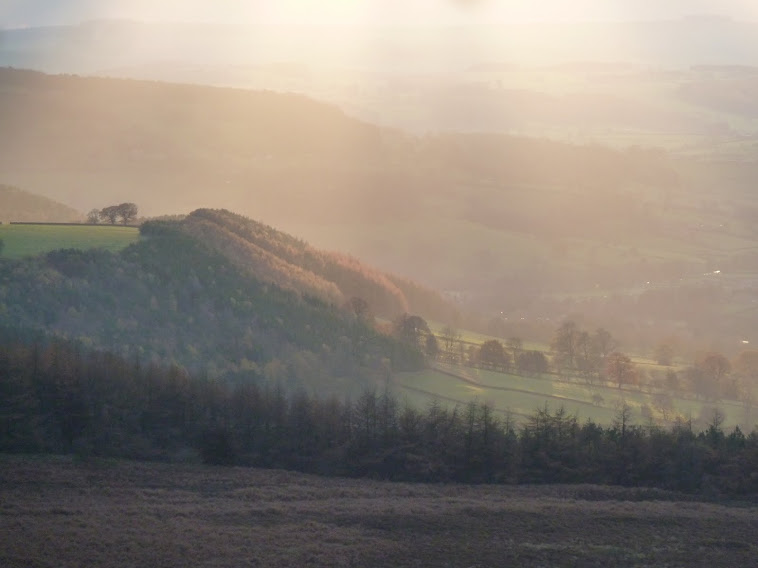 ... not a Victorian parlour game but what I did when taking a walk a couple of years ago in the Derwent Valley, Derbyshire.

You see there's a pike that lies in the water at the Cromford end of the Cromford Canal that must be over  two feet long ... no, really ... just look at him or her ... I know it would have helped if there had been something else in the water to help you compare but take my word ... this pike is over two feet long.

Sir Richard Arkwright's Cromford Mills were my starting point for a springtime walk in 2011. After passing the pike I walked past this rather attractive old redbrick building set amongst the even older stone-built ones of the Cromford Mills set-up ... I passed the old Primitive Methodist Chapel at Scarthin, now a private house, with this engraving above the front door ... I have shown this engraving before but I still think it is one of the most poignant ones I have ever seen.

Almost immediately I took the paved path up towards Hillside on my way towards Matlock Bath ... ... and, in particular, Upperwood. Isn't it beautiful ? The path runs along the private drive hereabouts on the hillside above the busy village of Matlock Bath ... ... from where you can get a distant view of Riber Castle across the other side of the valley ... The lane up to Upperwood has its drawbacks as you can see but it is a lane open to all vehicles. Imagine driving up here in any sort of car ... After a while I took a narrow, overgrown path leading downhill towards Matlock Bath ... On reaching the main road, the A6, as it passes through Matlock Bath, I turned right back towards the start, passing this trough belonging to the Drinking Fountain and Cattle Trough Association where it stands not so far from the church ... Then I was walking beneath another of Arkwright's amazing mills. This time Masson Mill built in 1783 but 'established' in 1769 ... A riverside path between the River Derwent on the left and the limestone tor of Scarthin Rock on the right leads to Cromford Church where you can turn right back to the canal ... ... and that enormous pike.

* distance calculated on Ordnance Survey's Getamap
Posted by Unknown at 17:49